The card game of Blackjack was introduced to the United States sometime in the 19th century, but the origin of the game is still disputed among historians. The roots of blackjack can be traced back to several European card games including the French ‘Vingt-Un’ (21), ‘Trente et Quarente’, and ‘Chemin de Fer’ (Railroad), as well as the Spanish ‘One and Thirty’, Italian ‘Baccara’ and ‘Seven and a half’ which all have similarities to modern Blackjack. When gambling was legalized in Nevada in 1934, and Blackjack was offered as a game that was most commonly played with one or two decks of cards. 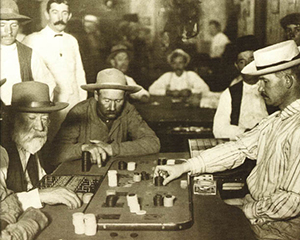 Did You Know? Blackjack was not very popular when it was first introduced in United States casinos. As a result, casinos began offering different types of bonuses to attract players. One bonus was a 10-to-1 payout if a player’s hand consisted of the ace of spades and either the Jack of spades or clubs. Since these two Jacks are “black” they named the hand “blackjack” and the name stuck.

Roger Baldwin published a paper in 1956 which explained hot to reduce the house advantage based on probability and statistics which was quite confusing for those who were not mathematicians. In this publication entitled “The Optimum Strategy in Blackjack”, he described his findings about the game. Using numerous calculations (they didn’t have computers to help them then) he described the ways for beating the game.

By the early 1950’s statisticians and programmers calculated the odds of each play for any given hand; thus basic strategy (statistically correct play) was developed. Baldwin, Cantey, Maisel, and McDermott first published their findings in their 1956 best seller, Playing Blackjack to Win.

A few years later, in 1962, Dr. Edward Thorp published the first book, Beat the Dealer, which outlined card counting techniques and the strategies for reducing the house advantage. It demonstrated that it was possible to consistently beat the dealer through “card counting”.

During this time, computer experts like Julian Braun of IBM, ran several computer models of the game programmed to play millions of hands. This also supported Thorp’s claim that the dealer could be beaten. Blackjack hysteria swept the world as people flocked to casinos to play this game that was theoretically winnable.

Casino owners responded, almost overnight, by drastically changing the rules of the game, making it tougher to win. These drastic changes inadvertently scared the public away, as soon people believed that any hope of beating the game was lost.  As a result, the casinos witnessed a huge drop in profits. Amateurs and casual players, who once made up the bulk of the casinos’ revenues, stayed clear and only dedicated experts dared to play the new leaner, meaner blackjack.

A few weeks later, the casinos realized they were losing so much money, that they reluctantly reinstated the original rules. Since the word was out that the game theoretically could be beaten, all of the old players, plus a host of new ones, flooded the casinos once again, and casino profits soared higher than ever before. The new systems had been a blessing in disguise.

Casino owners realized a fact that is indisputable, even today.

Although in principle, it was possible to beat the game, in reality, the vast majority of players did not have the understanding, or the discipline to use complex card counting systems effectively.

A few masters had the know-how to get ahead and walk away with casino profits, but the vast majority could not. Sure, the casinos implemented a few strategies to discourage card counting, such as adding multiple decks, reshuffling well before the end of the deck was reached, and training dealers to recognize and sabotage counters during large bet increases, but the basic rules of the game remain unchanged. Casinos continued raking in the bucks, and the world continued to turn.

Blackjack, which was once a table game that used to be stuck in the corner of most casinos, is now the most popular table card game in the United States. In today’s version of Blackjack, any ace combined with any ten point value card-10, jack, queen and king, counts as a natural Blackjack, except after a split.

Blackjack is a widely popular game around the world and has only seen an increase in players as the years progress. As a result, it has spawned several variants over the years. Of these Spanish 21 , Pontoon , Double Exposure Blackjack and Chinese Blackjack are common. Elimination Blackjack , which is in the format of a tournament, is also very popular. What once was a game that was not popular and seemingly too difficult to play with ‘strategies’ and ‘counting cards’ it is now the most popular card game to play at a casino in most of the world.

Find out which rules are currently being offered at popular casinos near you on our Casino Rules & Conditions page.