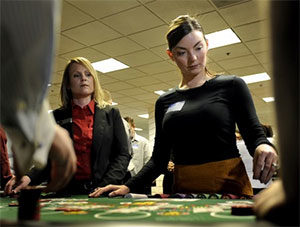 There are many stories about how blackjack players have cheated casinos out of millions using everything technique from card counting to stashing aces up the sleeve, to marking cards, to chip placing, and team plays. But very few have described the tricks that some casinos have used to fleece unsuspecting players.

Be advised that these practices, many of which border on unethical or even illegal blatant cheating, are rarely seen in the larger more regulated gambling cities of the world. Big name casinos wouldn’t want to risk their reputation, or their business license, when they can make huge revenues from a clean game. Even so, one must be vigilant, particularly in the smaller hole in the wall establishments in remote less regulated areas.

That being said, here are some of the most common casino tricks used against blackjack players…

While not cheating necessarily, many casinos employ a number of psychological methods to maximize the amount of play they receive from each player and in addition create an environment that is conducive to a player making errors in judgement, which over time, increases the casino’s hourly profits.

For example, dealers are instructed to deal as quickly as possible to get in more hands per hour, which allows the house’s edge to take a greater statistical effect. Playing 100 hands will more closely reflect the statistical result of a 2 percent house edge than playing 10 hands, where the player can profit from a lucky winning streak.

Some casinos even pump oxygen into the air to keep you awake and playing longer.

Lastly, casinos force patrons to play mid and high stakes blackjack, by raising table limits when crowded and by offering fewer low limit tables, which leads to faster profits for the house.

Dealers who use sleight of hand tricks are called card mechanics. Dealing seconds is a method of manipulating a deck of cards during a card game by way of dealing the second, rather than the top card of the deck, usually for the purpose of cheating.

Bottom dealing is similar, although instead of dealing the second card, the dealer has peeked at the bottom card and can deal that card to force the player to bust when needed. Dealers who cheat this way are so skilled that they can slip a player a bust card completely undetected.

The most common way of cheating at the BJ table by dealers is by false shuffling or loose shuffling. It was a common practice in the days of mob owned casinos, although some claim it is still practiced in some shady establishments today. Watch how they shuffle next time at the BJ table. Why does it help the house, very simple. The dealer collect the cards the way they were play in case there is a problem and they could show how the last round was played. The pattern of the collected cards are- high card stick together and low card stick together. It you have two 10s, you stay. If you have low cards, you kept hitting you get something. Imagine if the dealer collect all the cards and deal WITHOUT shuffling, what happen to the two 10s that was dealt to you before? No one in the next round will get those two high cards again. One player will get one and another play will get the other. That’s why some players insist on machine shuffles.

Removing Cards from the Deck

Before I describe, this method, it should be noted that the following is completely illegal and casinos employing it, if caught, would surely face criminal prosecution from the gaming authorities.

That said, some casinos have removed one or two 10-value cards from the shoe, which increases the house edge. Fewer tens in the deck are disadvantageous to the player because it lowers the chances of him getting a blackjack and receiving those higher hand payouts. Fewer blackjack payouts means fatter returns for the house.

These are the most common deceptive ways that casinos have been found to cheat honest people out of their hard earned money. I can’t say if it’s cheating or not, but I tend to get grouchy if the dealer changes their style of dealing or grip for no apparent reason and junk starts flying out. Sure, maybe it’s just getting clubbed over the head with luck, but it’s suspiciously coincidental-feeling…

This article was specifically about how land based, brick and mortar casinos cheat. For the scoop on online casinos, read our article entitled: Do Online Casinos Cheat?

If you know of any other ways shady casinos swindle players, or countermeasures players can take, please comment below.